There are not too many times when you get to revisit history and live in it for a while. Times when you are transported to a different place. A place that is so back in the past that you question yourself -Do you truly belong to the same human civilisation? We have left so much of history behind us. So many people,cultures, songs, dances, food,stories the list can keep on going. History is a fascinating subject. The more I read into history the more I realise that globalisation has made us lose our differences. We slowly have become the same people. As I was heading back home from the festival I asked myself this question -If I had to start a festival of my own showcasing my culture, my clothes, my food, my songs, my dances how will the festival look? Take a minute and think about this. The truth is globalisation has killed culture. We all have the same stories to tell. Global warming, scarcity of water, corruption, the growing inequality between poor and rich, politics and media that is run by the corporate sector. They are all the same stories, the same struggles, the same history we are leaving behind. Our clothes, our music, our struggles are all almost the same.

Unlike us our ancestors were not at all boring. India is a haven for history and culture. We have such amazing stories to tell. Imagine this! You walk into the Raigad fort for a weekend festival. (Raigad is a hill fort situated in the Mahad, Raigad district of Maharashtra, India. Shivaji Maharaj built this fort and made his capital in 1674 when he was crowned King of a Maratha Kingdom which later developed into the Maratha Empire eventually covering majority of modern-day India. ) Inside the fort everything from Shivaji’s era is re-created the costumes, the dances, the songs, the food, the stories. How would that feel? A festival like this would be such a great outing. For the people who love history it would be heavenly ,for the ones who don’t they might get intrigued about their history. I think a festival like that would be a major hit.

Scarborough Renaissance Festival was  first run in 1981. The festival is open Saturdays and Sundays from the first weekend in April until Memorial Day Monday. The festival is historically based in the 16th century, under the reign of King Henry VIII. The festival is 35 acres (140,000 m2) in size, taking place on a 165-acre (0.67 km2) site. There are 21 stages with more than 200 performances. Three jousting shows take place each day. There are about 150 cast members that make up the characters at Scarborough Renaissance Festival. Almost all of the cast members are volunteers.

The  Festival also features 200 shops selling goods such as candles, soaps, jewelry, children’s toys and even musical instruments. Many of the craftsmen selling their goods also provide demonstrations on how the items are made. The festival also features the Crown Kitchens – a selection of food stalls serving turkey legs (the festival serves over 20 tons of this signature food item per year), food skewers, sandwiches, ice cream and other items.

The moment I entered the walls of the festival I was transported. I was almost jumping with excitement and pure curiosity. My husband had to calm me down most of the times. The festival has made me so curious about the medieval times. Being a lover of history this one day was pure heaven. I am going to stop talking and let you got through the pictures. Hope you love them! 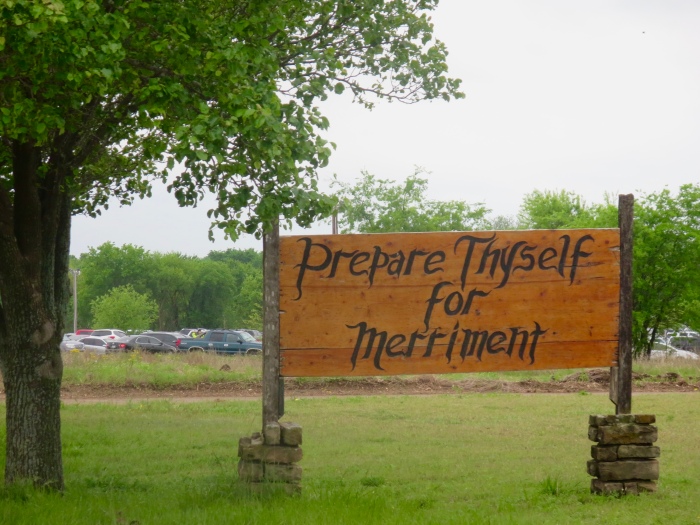 The Scarborough Festival was an experience that justified my love for history and made me more determined to always be in search of it.